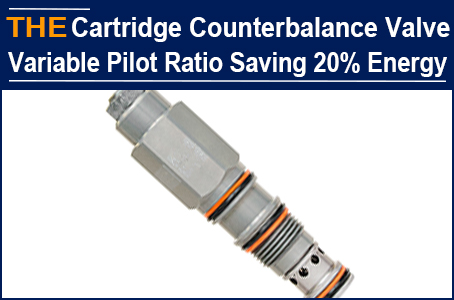 Romeo is from Argentina. At the beginning of this year, their customer customized a set of personalized hydraulic lifting equipment. The test run of the equipment was smooth. After the trial, the customer reported that the energy consumption of the equipment was a little high. After the inspection, the engineer found that the throttling loss of the hydraulic cartridge counterbalance valve is large when the load is low and the flow is large, which is the source of high energy consumption. They requested the manufacturer to optimize the hydraulic cartridge counterbalance valve. The manufacturer tried for 4 weeks but no result. Romeo contacted some other hydraulic cartridge valve manufacturers, but there was still no good plan. The customer had been pushing for update, Romeo had no idea yet and was very worried.

2. The control piston is provided with an annular boss which is close to the end face of one side of the first chamber. One end of the valve spool is against the second acting surface, and the end cover is connected with the control piston in a sliding seal.

3. The end cover is also provided with an annular boss to form an annular groove of the sliding seal and a connecting oil passage, and the annular groove is close to the end face of one side of the first chamber. The second chamber is formed between the two working surfaces of the piston, which can easily realize the function of controlling the piston.

AAK hydraulic cartridge counterbalance valve, with variable pilot ratio and pilot pressure, you can also have a small trial!