Big enterprises are going through the winter, but AAK thinks that the spring of small and medium-sized Chinese hydraulic valve manufacturers is coming 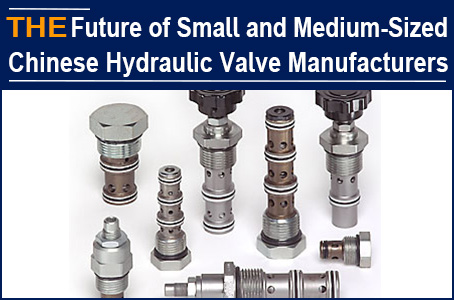 A few days ago, Ren Zhengfei, President of Huawei, made an internal speech about "surviving", which affected the outside and also had a great impact. The boss of a trillion level enterprise said that the global economy will continue to decline in the future, and the domestic economy will also be grim. Subsequently, social media interpreted that large enterprises were going to survive the winter, and that small enterprises were going to die.

It seems that large enterprises catch a cold, and small enterprises must be in the late stage of cancer. What is the logic? I have always said that pessimists are right and optimists make money. In any case, pessimists who have been singing down China can hardly make money. The more optimistic you are, the more confident and powerful you will be. The more gloomy you are, the less action you will take.

Drinking milk to supplement calcium, few people will doubt its correctness, but many doctors recommend drinking soymilk in the morning. Why do we think that the absolutely correct facts are not necessarily right or even absolutely wrong? Should we need to see things on social media? To see, the key is to have your own independent thinking. But it's not easy to think independently. Do you think you can think independently if you close the door and sit there alone? At least I'm not very confident about my independent thinking.

Think, think independently, that's right. But thinking must have a foundation of thinking. Usually, my method is to read more books, especially those classic or relatively classic books, and absorb some basic things from those books. This is several times more than independent thinking without any cognitive foundation. Therefore, while reading classic books, we should also keep pace with the times, and books closely related to the times are also essential. It's better to read the book in 20% and 80%. 20% of the classics and 80% of the books are closely related to the times.

Ren Zhengfei's theory of "surviving" is also in line with business common sense. No matter what time, the first task of a large enterprise is to "survive". Only by living can it continuously create value. Objectively speaking, it is not a bad thing to have a little pressure and worry and make people feel a little crisis. In addition, Huawei's theory of "surviving" is not pessimistic. In fact, it expresses that "I can survive and live well", which is obviously optimistic.

Small and medium-sized Chinese hydraulic valve manufacturers, it is difficult to do things, which is objective and must be admitted. Pessimists say "I don't live", optimists say "I want to live". When ordinary people complain, Sakyamuni also complains. Then why can he become a Buddha? Because in addition to complaining, he also broke the pain and enjoyed it. Small and medium-sized Chinese hydraulic valve manufacturers should, like Sakyamuni, break through hardships, seek pleasure and go their own way.

AAK has always been an optimist of small and medium-sized Chinese hydraulic valve manufacturers. It is spring every day because of its strict manufacturing quality.